The first law regulating the handling of laboratory animals on our continent was the “European Convention for the Protection of Vertebrate Animals Used for Experimental and Other Scientific Purposes” signed on March 18, 1986. Poland was not a signatory to this convention in those days, but when entering the European Union we were obliged to respect it. Currently, the European Convention and the Directive  (signed by the European Parliament and the Council on September 22 in 2010) set a new European standard for animal experiments.

Of all animal groups, “laboratory animals” are the best legally protected group. In highly developed countries, it is practically impossible to conduct research and keep laboratory animals without proper permits and controls, which apply to both the breeding process and procedures used in research projects.

The new EU Directive 2010/63/EU, which defines the standards of animal experiments, underlines the importance of the so-called “3Rs” principle, which should be followed when designing and conducting research involving laboratory animals. The “3R” comes from words: Replacement, Reduction, Refinement. The application of the 3R principle is necessary to successfully apply for the approval of the Local Ethics Committee. 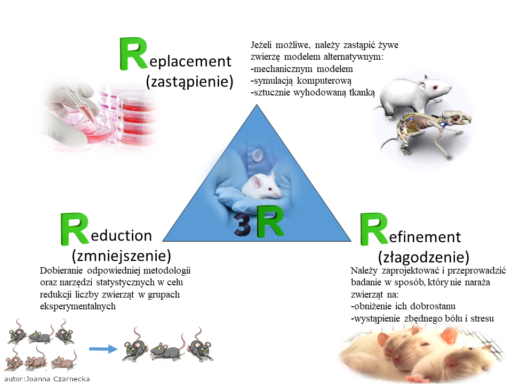 The principle of replacement

The principle of replacement means that we should to use other methods in experimental and scientific procedures (which is scientifically satisfactory and possible) without using animals. Such methods include, among others, studies on cell and tissue cultures, specialized computer simulations, experiments on phantoms (physical models) and studies on human volunteers.

The principle of reduction

The principle of reduction means that the minimum number of animals should be used in experimental and scientific procedures, allowing for reliable verification of the results with appropriate statistical tests. It is possible to carry out procedures on animals several times, if it does not harm their welfare.

The principle of refinement

The principle of refinement means that we should to improve the conditions for breeding, keeping and caring for animals, as well as the methods used in procedures, so as to eliminate or reduce any potential pain, suffering, distress or permanent damage. When performing an experiment, the level of suffering of the animals should always be reduced to a minimum through the use of analgesics, or the introduction of the animal into a state of anesthesia or a coma.