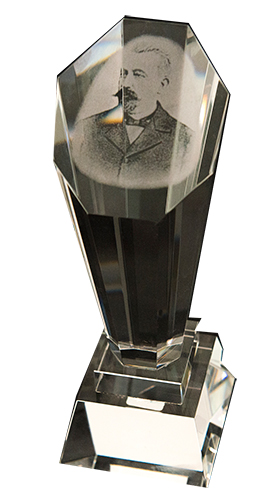 The Nencki Prize was established by the Scientific Council of the Institute to honor outstanding scholars who, at the same time, are our special friends and helped us in our scientific efforts. The people with whom we have collaborated, with whom we have shared passion and scientific interests. The Scientific Institute cannot exist in isolation, it must operate within a network of colleagues connected by shared research topics.

The first laureate of The Nencki Award is Professor George Gerstein. George pursued his career in neuroscience at the University of Pennsylvania, where he is now Professor Emeritus. His interactions with Nencki Institute started in the sixties, when Professor Remigiusz Tarnecki was on sabbatical at the University of Pennsylvania. In the seventies several researchers from Department of Neurophysiology of Nencki Institute worked as postdocs in Georges’ laboratory. Then he spent a sabbatical year in the Nencki Institute, bringing over 2 laboratory mini-computers, which he integrated with laboratory equipment and taught our colleagues to use and program them to control and analyze neurophysiological experiments. He regularly has remained in touch with the Nencki Institute since then, coming to scientific meetings at the Institute and being on the editorial board of Acta Neurobiologiale Experimentalis.

Professor Carafoli’s close contacts with Polish scientists date to the late 1960s when he first visited various Polish universities and research institutes under the so-called “twin cities programme” (Modena – Lublin). At that time he discovered common fields of interest with researchers of the Nencki Institute. One of the first results of this collaboration was the joint organization with Professor Witold Drabikowski of the first international conference on calcium binding proteins in Jabłonna on the outskirts of Warsaw in 1973.Ernesto Carafoli’s laboratory in Zurich hosted several researchers from the Nencki Institute, either as post-docs or short-time visitors. During the martial law in Poland (December 1981) Professor Carafoli protected and supported Polish scientists who happened to find themselves in Switzerland.

Elżbieta Jankowska is one of the most prominent specialists in the field of functional organization of the spinal cord. Her scientific career begun at the Nencki Institute, where she received her PhD and habilitation. She completed her postdoctoral training at the Marey Institute in Paris and at the University of Göteborg. She stayed in Göteborg to continue her scientific career and currently is a professor emeritus of the university. Prof. Jankowska authored over 200 scientific papers.

The Award was presented to the Laureate by Prof. Małgorzata Kossut, the Committee Chairperson on May 28th. During the ceremony Dr. Korn presented the lecture on Myosin Then and Myosin Now. Afterwards, his former collaborators and Nencki alumni (Jacek Kuźnicki, Dorota Kulesza-Lipka, Maria Jolanta Rędowicz, Małgorzata Mossakowska i Joanna Szczepanowska) shared his memories of working in the laboratory headed by the Laureate.

Professor Dreher prepared and defended his PhD thesis in Neurophysiology Department in Nencki Institute under supervision of Prof. Boguslaw Zernicki and followed up his postdoctoral training with Peter Bishop in the Department of Physiology in at Australian National University in Canberra. From 1968 he works on the University of Sydney and in 1995 he was nominated a Professor of Visual Neuroscience in the Department of Anatomy and Histology in Bosch Institute, where he leads the Laboratory of Functional Organization of Mammalian Visual System. His research is focused on the structural and functional aspects of the developing and mature mammalian visual system, mechanisms of cortical plasticity following retinal injury, and interaction of thalamic and cortical activity in the primate visual system. Professor Bogdan Dreher is a coauthor of more than 100 of journal articles and book chapters. Despite of long distance between Poland and Australia, Professor Dreher maintains close connections with the Nencki Institute hosting postdocs from the Institute and working in the board of Acta Neurobiologiae Experimentalis.

Professor Pitkanen is well known and respected in the field of epilepsy research. She is a leading researcher in basic epilepsy research and traumatic brain injury. She is interested in molecular mechanisms of epileptobgenesis, traumatic brain injury and brain imaging in epielptogenesis. Has published over 270 peer-reviewed articles, cited over 10 000 times. Her H index is 55. Professor Pitkanen has vivid collaboration with several groups at the Nencki Institute within the frame of European grants.

Professor Azzi has been awarded a honorary doctorate from the University of Buenos Aires, and from the University of “Roma 3” in Rome. But for us it is probably the most important that Professor Azzi since 1994 has been a Foreign Member of the Polish Academy of Sciences, and that his contacts with Polish science, and with the Nencki Institute in particular, go back more than 40 years. These close contacts with the Nencki Institute started in the late 1970s and led to many publications, and scientific collaboration with numerous research groups in the Nencki. Several researchers from the Nencki Institute were trained in the laboratory of Professor Azzi. This fruitful collaboration produced all together 45 collaborative publications (44 research articles and reviews and 1 book).

In the 1990s, when the political situation in Poland has changed, and when Professor Azzi formed the UNESCO Global Network of Molecular and Cell Biology (MCBN), he invited the Nencki Institute as a Polish coordinating hub of the Network. This allowed to obtain substantial financial support both from UNESCO and from the Polish State Committee of Scientific Research. The Polish MCBN was granting  small research grants, fellowships and conferences support to many research groups in Poland, at the same time placing the Nencki Institute in a position of a national coordinator of new activities. All this would not have been possible without the idea, inspiration and the initial help of Angelo Azzi.

Professor Jacek Gaertig, from the University of Georgia in Athens, USA, has been awarded the Nencki Prize 2018