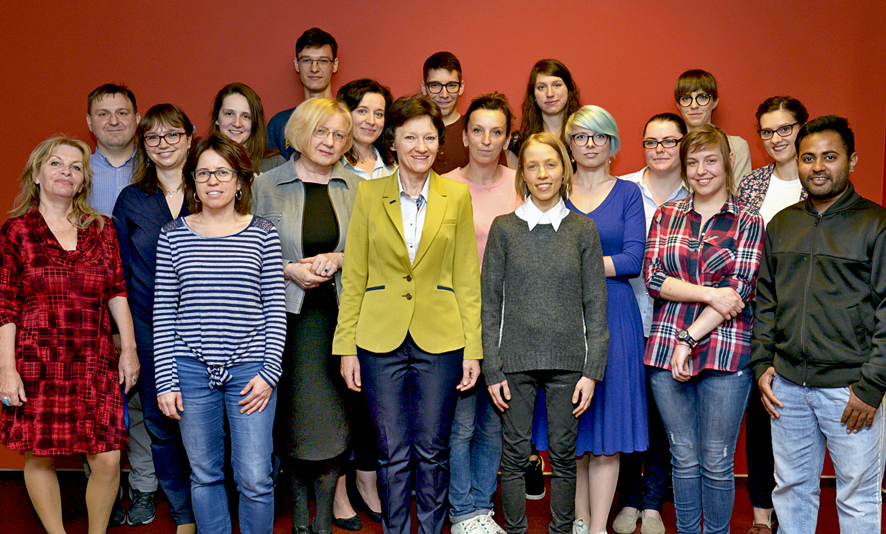 The mission of the launched in 2014 laboratory is translation of discoveries from basic neuroscience to clinical trials. The Laboratory conducts its own research and provides the core-facility services for investigators from the Nencki Institute and other scientific and R&D institutions.

Our research focuses on molecular mechanisms of aging-related neurodegenerative diseases, mainly of Alzheimer’s disease (AD), which increasingly becomes one of the main crisis in the demographically ageing societies. The current treatments are inadequate because of the unclear AD pathogenesis and  mechanisms of progression. Our studies aim at elucidation of early molecular and cellular mechanisms of AD for identification of new therapeutic targets and non-invasive biomarkers, especially  for the early, pre-dementia AD stage. We are particularly interested in the regulation of the cell cycle and apoptosis in neurodegeneration and carcinogenesis, two main aging-related pathologies, and their relationships. The processes underlying AD are being studied at the level of gene expression, epigenomic regulation by microRNA, protein signaling, as well as at cellular and behavioral levels, using standard and newly developed by us animal and cellular AD models. We also investigate systemic changes in AD, mainly in human blood cells and plasma (biobank of over 100 lymphocyte lines from AD patients and non-demented age-matched control subjects).

A line of research lead by Grazyna Niewiadomska (PhD, DSc) aims to understand mechanisms involved in neural ageing and possible reversal of brain dysfunctions induced by aging. Towards this end, we implement new experimental protocols and conduct longitudinal studies using rats and transgenic mice models of AD and Parkinson’s disease (PD). We attempt to link cellular and behavioral levels of the brain processes present during physiological and pathological ageing. We develop quantitative approaches to the study of behavior which enable analysis of the relationships between the elements of a given behavioral proxies. In collaboration with TauRx Therapeutics Ltd,  we develop novel treatments, animal models and diagnostic procedures for the tauopathic diseases and assessment of toxicology, safety pharmacology, pharmacokinetics and behavioral effects of novel potential therapeutic compounds.

Prof. Urszula Wojda is a member of an international consortium that has received a EU Horizon 2020 grant in the FETOPEN: Research & Innovation Action, Novel Ideas for Radically New Technologies competition. The aim of the consortium’s research is to develop new strategies for the treatment and diagnosis of Alzheimer’s disease based on studies of glycobiological alterations in AD. The “ArrestAD” project received the highest possible evaluation of reviewers (15/15).

The consortium of the “ArrestAD” project includes the following entities:

Prof. Urszula Wojda with her group from the Laboratory of Preclinical Studies of Higher Standard of the Neurobiology Centre at the Nencki Institute examines the relationships between genetic and proteomic factors of AD and changes of glycosaminoglycans in blood cells, as a basis for developing new strategies for the early diagnosis of AD. Blood samples for the research are provided by Prof. Thomas Gabryelewicz’s team from the Alzheimer’s Ward of the Central Clinical Hospital of the Ministry of the Interior and Administration in Warsaw.